Cover reveal - Wrecked with you by J.Kenner 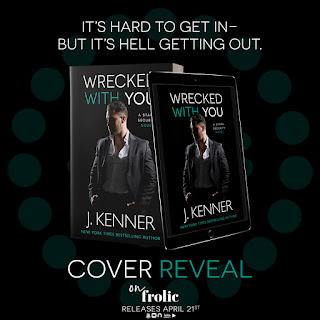 It’s hard to get in—but it’s hell getting out.
Wrecked With You, an all-new sexy and suspenseful standalone in the Stark Security series by New York Times and #1 International bestselling author J. Kenner, is releasing April 21st! Check out the sizzling hot cover revealed yesterday on Frolic!
Pre-order your copy today! Amazon: https://amzn.to/2HwJEeC Apple Books: https://apple.co/38znq7y Amazon Worldwide: http://mybook.to/wreckedwithyou Nook: http://bit.ly/2Hud90v Kobo: http://bit.ly/2Pf3pM3 Google Play: http://bit.ly/2OY3tzy
Check out the full article on Frolic → http://bit.ly/WWYFrolic
He's spent a decade chasing shadows. Ten long years tracking down the man who kidnapped him as a child and murdered his mother and uncle. And finally, Antonio Santos has found him.
All he needs is access to the exclusive private island. A carnal wonderland that only the elite can enter. But to gain access, Tony needs two things. The significant fee. And a woman.
An experienced operative with deadly skills, Stark Security agent Emma Tucker has no desire to be Tony’s arm candy, especially when she’s still reeling from a breakup. But the more she works with Antonio, the more she admires him. And when the island’s games push them over a sensual cliff, she can’t deny that his skills top the charts in the bedroom, too.
Bit by bit, admiration leads to passion as the mission twists and turns. Soon, they become lost in this island playground full of lust, greed, and danger. Where they could both lose their hearts … or their lives.
By Obsessed book reviews at February 20, 2020