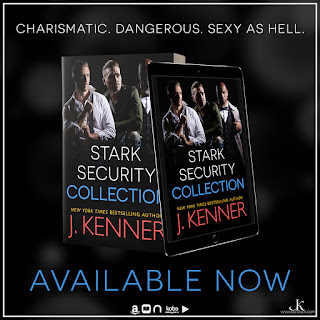 Kenner may very well have cornered the market on sinfully attractive, dominant antiheroes and the women who swoon for them.”—RT Book Reviews
Are you ready to meet the elite team at Stark Security? The first three books in the Stark Security Series by New York Times and #1 International bestselling author J. Kenner, are available now in one red hot collection.
Download your copy today! Amazon: https://amzn.to/2Kn9bs7 Apple Books: https://apple.co/3eFftRv Amazon Worldwide: http://mybook.to/starksecuritycoll Nook: https://bit.ly/3bsQ0Jf Kobo: https://bit.ly/3eEPolN Google Play: Coming Soon! Amazon Print: Coming Soon! Barnes and Nobles Print: Coming Soon!
They’ll take any risk to get the job done.
Charismatic. Dangerous. Sexy as hell.
Meet the elite team at Stark Security.
This Collection includes:
Shattered With You
Broken With You
Ruined With You
Shadows of You (a short story that is a prequel to Broken With You)
SHATTERED WITH YOU
The only price she won’t pay is her heart.
Quincy Radcliffe has fast become a key asset at the newly formed Stark Security. A former British agent with lethal skills and criminal connections, it’s a no-brainer for him to rise through the ranks.
But Quincy isn’t the man he appears to be. And one woman could expose all his secrets.
Once, he worshipped Eliza Tucker. He adored her body and then broke her heart. But now she needs help, and he’s the only man that can do it. Quincy knows he must either turn his back on her or risk revealing his dark past to the one woman who can—and will—tear open his old wounds.
For years, Eliza has tried to forget the man who shattered her. His smoldering good looks had drawn her in; his British charm had enchanted her. But it was the wildness of his seduction and the ferocity of his passion that captured her. She’d given herself to him—and he’d destroyed her.
Now, he’s the only person who can help find her missing sister.
She’ll use him because she has to. She’ll pay anything he demands, whether in the bank or the bedroom.
She won’t fall for him again. But what if it isn’t her choice to make?
BROKEN WITH YOU
True love never fades…
After surviving a troubled childhood, Denise can’t believe that she’s blissfully married to her partner and soulmate. She’s confident that not even Mason’s long-term, deep-cover assignment will shake their bond. And she certainly doesn’t anticipate that when he finally walks back through her door that he’ll have no memory of her, himself, or their time together…
When Mason is pulled out of an operation gone bad, all he knows is what he’s told — that he was a covert agent, that he has information vital to national security somewhere in his head, and that they can tell him no more for fear of burying those hard-fought secrets even further. They tell him nothing else; not even that the beautiful woman who makes his heart beat faster is not just his partner, but also his wife.
The secret she must keep wrecks Denise, who wants only to return to Mason’s arms. But despite the desire that still burns hot between them, she can’t tell him who she is—or that she’s carrying his child.
But when dark forces threaten both their lives in order to retrieve the information trapped in Mason’s mind, it’s not their past that will be tested, but the tenuous new love now burning hot between them.
RUINED WITH YOU
When her high maintenance boss is assaulted, manager Xena Morgan contacts the only person who can help—the sexy, arrogant, incredibly capable Stark Security agent Liam Foster. The former vigilante takes every case personally, and he's determined to find answers—particularly since he thought he'd cleared this threat already.
Xena had been thrilled when Liam completed his assignment, because he affected her in ways she didn't want to contemplate, awakening yearnings that threatened her deepest secrets.
But now she needs him, and her body won't let her forget it.
As their attraction heats to a feverish degree, the web of lies, danger, and passion they find themselves in tangles further. Liam will stop at nothing to protect his client, even if it means sacrificing everything he holds dear ... and exposing the secrets that may destroy him—and Xena—forever.
By Obsessed book reviews at April 24, 2020