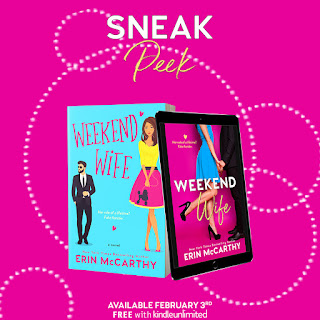 It should be the easiest job ever for an out-of-work actress, right?

All I have to do is pose as Grant Caldwell (the Third)’s fiancé for a fancy-pants weekend in the Hamptons. Easy. Wear designer clothing and sip champagne? Don’t mind if I do. Flirting with Grant? It’s so delicious I should be paying him.

Nothing can go wrong as long as if I can just keep my hands off of him.

But that’s the hard part. And I do mean hard.

Because Grant is sexy.
And bossy.
And surprisingly sweet, a real rarity in his pretentious family.

Oops. I’m not as good at faking it as I thought. Or maybe they call this method acting. Because it’s getting harder to figure out where my character ends and I begin…

It just might be the role of a lifetime.
Add WEEKEND WIFE to Goodreads: http://bit.ly/35JEWEF
Be notified FIRST when Weekend Wife is live: http://bit.ly/2tYmOsP
Sneak Peek from Weekend Wife:
I’m worried about you getting upstairs. What floor do you live on?”
I bit my bottom lip. He was going to want to help me upstairs because he was surprisingly kind. And I was going to want to invite him in. Which would be bad. Because there was really only one thing I wanted from Grant Caldwell and it wasn’t the hundred bucks in my pocket that he refused to take back.
He wasn’t my type. I wasn’t his type.
Wealthy businessmen and admittedly bohemian actresses do not have relationships.
But that didn’t mean they couldn’t have passion.
I kind of wanted to make out with Grant, old school, given how teen my crush was.
I should lie, say I lived on the first floor so he’d walk me to the front door and nothing more. I opened my mouth. My inner flirt won the fight as I told the truth.
“I live on the fifth floor.”
“Is there an elevator?”
“No. It’s a lot of stairs. Like, a lot.” Subtle. Not.
“Then let me help you upstairs.”
Want More? Click here: http://bit.ly/2RNkgWy