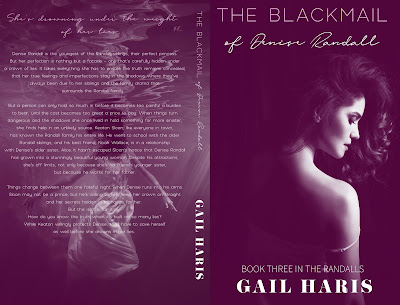 She’s drowning under the weight of her lies.

Denise Randall is the youngest of the Randall siblings, their perfect princess. But her perfection is nothing but a façade – one that’s carefully hidden under a crown of lies. It takes everything she has to ensure the truth remains concealed, that her true feelings and imperfections stay in the shadows where they’ve always been due to her siblings and the family drama that surrounds the Randall family.

But a person can only hold so much in before it becomes too painful a burden to bear, until the cost becomes too great a price to pay. When things turn dangerous and the shadows she once lived in hold something far more sinister, she finds help in an unlikely source.

Keaton Sloan, like everyone in town, has known the Randall family his entire life. He went to school with the older Randall siblings, and his best friend, Noah Wallace, is in a relationship with Denise’s older sister, Alice. It hasn’t escaped Sloan’s notice that Denise Randall has grown into a stunningly beautiful young woman. Despite his attractions, she’s off limits, not only because she’s his friend’s younger sister, but because he works for her father.

Things change between them one fateful night when Denise runs into his arms. Sloan may not be a prince, but he’s willing to help keep her crown on straight and her secrets hidden in exchange for her.

But this isn’t a fairytale and while he’ll willingly protect the princess, she’ll have to save herself as well before she drowns in her lies.

The biggest question is how do you know the truth when it’s built on so many lies?

Gail Haris believes in fairytales, love, and laughter as the best medicine.

She was born and raised in a small town in Southeast Missouri. After graduating with a degree in Mass Communications, Gail went on adventures traveling in America and Europe.

But her favorite adventures are the ones where she gets lost in a book.

Her love for reading and traveling lead her to attend book conventions. Those conventions gave her the encouragement she needed to combine her passion for creativity and storytelling. Using coffee and her imagination, she loves writing contemporary romances that blend laughter and true love out of every day chaos.

When Gail isn’t day dreaming in front of her computer, she’s busy raising her two daughters with the man of her dreams. She loves traveling with her family, binge watching television series with her husband, singing Disney songs with her daughters, and having huge family and friends get-togethers that involve lots of food and usually a cake.

She hopes by following her own dream of becoming an author, she can set an example to her daughters that dreams can become a reality. Maybe she can encourage you too.

Never stop believing in love, dreams, and yourself. And coffee…don’t give up on coffee and books ;)