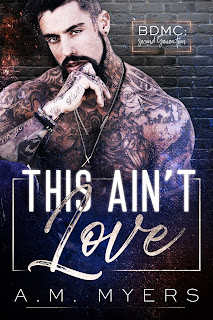 This Ain't Love
BDMC: Second Generation, Book 1
By: A.M. Myers (https://www.facebook.com/authorammyers/)
Photo by: Wander Aguiar
Cover by: Daqri Bernardo @ Covers by Combs
Quick-witted and sharp-tongued radio DJ, Isabelle Hutton, isn’t afraid to own her sexuality. She loves sex and won’t apologize for it, but the moment any man starts to get too close or develop feelings, she’s gone. She likes her life just the way it is and refuses to make room in it for anyone or anything else.
Former police detective and member of the Bayou Devils MC, Diego Rodriguez, is as lost as a man can be. After a long line of hits that knocked him on his ass, he’s given up on his dream of finding love and having a family of his own. Instead, he buries himself in work to forget all he’s lost and everything he'll never have.
When Izzy stumbles onto something she wasn’t meant to see and an attempt is made on her life to shut her up, she turns to the Bayou Devils for protection, thrusting the two of them together. As Diego takes over her case, trapping them under the same roof, the chemistry between them explodes but Izzy is keeping a secret from Diego that will change his entire life.
Can he keep her safe from the man hunting her and do what it takes to make her his? Or will she be just another hit to his battered heart - one that could take him out for good this time?
Pre-Order your copy here >> readerlinks.com/l/1380197
By Obsessed book reviews at October 16, 2020