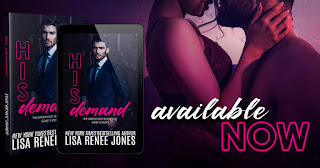 𝗟𝗜𝗩𝗘 𝗘𝗔𝗥𝗟𝗬 𝗢𝗡 𝗔𝗠𝗔𝗭𝗢𝗡! HIS DEMAND by LISA RENEE JONES → http://mybook.to/Gabe1 (releasing everywhere else tomorrow, buy links below)Gabe Maxwell is a powerhouse in the boardroom, a man with a dark past he's buried under success and power. He's not a white picket fence and forever kind of guy and he's definitely not into redheads. That is until one corners him, kisses him and thanks him for waking her up. Right before she walks away and leaves him. She's gone and he's obsessed.Then she walks into his office and back into his life, and he has to have her. It doesn't matter that she's the kind of woman you marry. It doesn't matter that she's everything he avoids because she's everything he wants.Only Abbie isn't the good girl she seems. She has secrets and a past and soon, she'll pull Gabe into her bed, her life, and that spells more than obsession. It spells danger.BUY HIS DEMAND NOWApple → https://apple.co/2TpoaV2Amazon → http://mybook.to/Gabe1Paperback → http://mybook.to/Gabe1PNook → http://bit.ly/2HDNmpzKobo → http://bit.ly/2FYXUOvRead chapter one → http://bit.ly/2Sy9MwM
By Obsessed book reviews at February 11, 2019