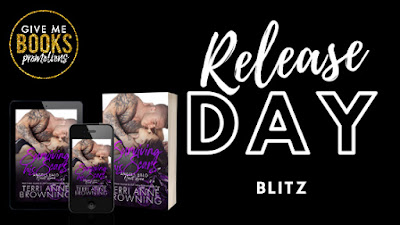 
Monroe
I have a secret.

One that will get the man I’ve been crushing on for years killed if my
father ever finds out.

My sister says he’s a stalker—how else could he know exactly when I’m
in trouble and come to rescue me?

I don’t care. He’s saved me over and over again, so I know he doesn’t
want to harm me. And every time I get so much as a glimpse of him, my heart
becomes even more his.

Gian
Everyone who hears my name instantly thinks I’m a monster.

They don’t know the real me. The one who hated the men who tried to
make me just as evil as them.

All I wanted was to burn their empire to the ground.

Until I saw her.

Her family thinks I wanted to hurt her when all I want is to protect
her.

The scars of my past aren’t pretty. They shroud me like a dark cloak,
making me feel like the devil I’ve been cast as. It would taint her sweetness
if I let them touch her.

But when she disappears on me, I can’t hold back any longer.

Terri Anne
Browning is a USA TODAY bestselling author. Being dyslexic, she never thought a
career in writing would be possible, yet she has been on bestselling lists
multiple times since 2013. Reese: A Safe Haven Novella was her first Indie
published book. The Rocker Who Holds Me changed the tables and kicked off The
Rocker... series featuring the sinfully delicious members of Demon's Wings. The
Rocker... Series is now complete with 12 books and the occasional novella.
Other books by Terri Anne include the Angel's Halo MC Series, as well as The
Lucy & Harris Novella Series, The Vitucci Mafiosos Series, and The Tainted
Knights Rocker Series.